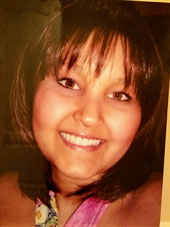 Before she was the name and face behind a thriving nonprofit organization, Zafia Christina Fyfe was the beloved daughter of Robert and Rebecca Fyfe. Abandoned on the streets of Uzbekistan at two months of age, Zafia was adopted at age three by the Fyfes. Despite her birth into such circumstances of hunger and neglect, Zafia thrived in the Fyfe’s care. She grew to love sparkly clothing, the color purple and spending time with her wide circle of friends.

But just as she was blossoming into a beautiful, confident and determined preteen, cancer was cruelly on the move, invading her leg, pelvis, lungs and shoulder. At age 12, Zafia was diagnosed with stage 4 osteosarcoma cancer and given two months to live. After battling bravely for two years, she died at age 14 in 2006.

During her years of treatment, Zafia saw her parents taking turns at her bedside, making exhausting trips between home and hospital and facing the stress of her illness along with the strain of being displaced in order to support her. Which is why her final wish – along with a trip to the “Eiffel Tower” in Las Vegas and to donate all her clothing to an orphanage in a developing country – was for her parents to provide a place of comfort where other families could stay, without the stress of a long commute between hospital and home.

Twelve years later, the Fyfes have honored all three of those wishes. The “house” Zafia envisioned is provided through a strategic hotel partnership to serve more families with less delay – and the ability to scale up as needed. All the comforts of home are available to  those in need, at little to no cost to them.

Zafia’s dream was to keep families together and comfortable during a hospital stay. Despite her youth, she had the wisdom to recognize that the loving support of a family nearby is as powerful as the strongest medicine.

Robert and Rebecca Fyfe cherished their daughter and are committed to honoring her memory through Zafia’s Family House. We think Zafia is as proud of them as they are of her.

“New parents of twins in NICU, born prematurely, were able to stay at Zafia’s Family House.  They loved the convenience of being close by and being able to come to NICU at all hours. The new mom loved the handmade blanket, it was a significant source of comfort.”